GE has introduced two enhanced versions of its LM6000™, which are derived from the CF6-80E aircraft engine. The LM6000PG™ with a single annular combustor (SAC) and the dry low emissions (DLE) LM6000PH™, which has a low-emission combustor with the fuel nozzles arranged on different planes. As risk-and-revenue-sharing-partner, MTU has a 13-percent share in the LM6000™ program and a stake in both of the aeroderivative models. In comparison with their predecessors, the LM6000PG™ and -PH offer a 25-percent simple-cycle power increase and an 18-percent boost in exhaust energy for cogeneration or combined heat and power applications. The efficiency of the next-generation generators has been improved significantly, delivering reductions in fuel burn and emissions. 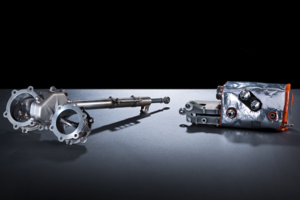