“In the first half of the year, the commercial spare parts and commercial MRO business in particular developed better than expected,” said Reiner Winkler, CEO of MTU Aero Engines AG. “We are expecting this trend to continue and are therefore able to substantiate and at the same time raise our forecast today.” MTU anticipates that its commercial spare parts business will see organic growth of around 10 % in 2018. So far, the company had projected a mid-single-digit increase. In the commercial maintenance business, revenues expressed in U.S. dollars are forecast to increase by around 20 %. Initially, MTU had anticipated a growth rate in the high teens. The outlook for the other segments remains unchanged, with the commercial series production business looking set to achieve the highest organic growth with around 30 %. MTU expects revenues from military business to be at the 2017 level.

“Overall, group revenues should reach around € 4.2 billion in 2018, slightly higher than previously assumed,” said Winkler. “Despite the enormous increase in low-margin series production business, earnings should also rise more strongly than initially expected.” MTU now expects EBIT adjusted of approximately € 640 million for 2018 (2017: € 572.5 million). This again corresponds to a significant increase in earnings compared with the previous year. In its original forecast, MTU had anticipated only moderate earnings growth. Net income adjusted is expected to increase accordingly to around € 450 million (net income adjusted, 2017: € 404.9 million). The company has specified the outlook for the cash conversion rate – the ratio of free cash flow to net income adjusted – at 40 to 50 %.

MTU recorded the highest revenue growth in the first six months in the commercial engine business. Here, revenues grew by 15 % from € 643.2 million to € 738.9 million. The V2500 engine for the A320 and the GEnx for the Boeing 787 and 747-8 accounted for the greatest share of these revenues. Regarding deliveries for the Geared Turbofan™ programs, CFO Peter Kameritsch commented: “We fully met our GTF delivery target in the first half of the year. In the second half of the year, the ramp-up will again intensify significantly. We are confident that we can also successfully master this challenge.”

In the commercial MRO business, revenues rose by 9 % to € 1,288.5 million (1-6/17: € 1,181.0 million). “In U.S.-dollar terms, the increase in revenues was, at 22 %, far more pronounced and once again demonstrates the high demand for maintenance services. We are meeting this demand both by expanding and adding to the portfolio of our worldwide MRO locations,” Kameritsch added. The main revenue driver in the commercial maintenance segment was the V2500.

At € 15.5 billion, the order backlog reached a new record level at the end of June 2018 (December 31, 2017: € 14.9 billion). Most of these orders relate to the V2500 and to the Geared Turbofan™ engines of the PW1000G family, foremost among them the PW1100G-JM for the A320neo. “With the Geared Turbofan™ programs we also scored at last week's Farnborough International Airshow,” said Winkler. The trade fair orders of around € 800 million according to list price are not yet included in the order backlog.

MTU increased its investment in property, plant and equipment by 76 % to € 88.8 million (1-6/17: € 50.6 million). The funds were used mainly for the expansion of MTU’s international locations.

MTU's workforce increased by 5 % to 9,264 employees compared with the end of 2017 (December 31, 2017: 8,846 employees). “New hires were taken on above all in the context of the ramp-up of Geared Turbofan™ programs and in commercial maintenance. In addition, the increase in the number of employees took account of increasing digitalization,” Winkler explained. The CEO continued: “We will continue to focus on these areas in the further course of the year when it comes to personnel planning.” 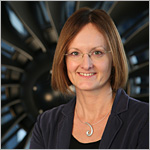