“With this result, we are on track to achieve our targets for 2019 and therefore confirm our forecast for the year,” said Reiner Winkler, CEO of MTU Aero Engines. “2019 looks set to become another record-breaking financial year for MTU. We are thus continuing with the company’s positive and sustainable development, which was rewarded with a listing on the DAX in the past quarter.”

In the commercial maintenance business, revenues in the first nine months of 2019 remained at the previous year’s level at € 1,995.9 million (1-9/2018: € 2,019.7 million). “In terms of organic growth, revenue in the commercial MRO segment has increased by around 8 %,” added CFO Peter Kameritsch. This growth was driven mainly by the V2500 engine, followed by the CF34 family of regional and business jet engines.

At September 30, MTU had an order backlog of € 20.8 billion (December 31, 2018: € 17.6 billion). “That is a new record and clearly underscores MTU’s excellent prospects,” commented Kameritsch. “In purely arithmetical terms, the order backlog corresponds to a production workload of more than four years.” The majority of these orders relate to the V2500 and the Geared Turbofan™ engines of the PW1000G family, in particular the PW1100G-JM for the A320neo.

In the nine months to the end of September 2019, MTU spent € 166.7 million on research and development, up 13 % on the same period of 2018 (1-9/2018: € 147.7 million). These R&D activities mainly focused on the Geared Turbofan™ programs and future enhancements, the GE9X engine for the Boeing 777X long-haul airliner, various technology studies and R&D projects relating to next-generation engine design. “In our R&D work, we are continually seeking ways to optimize current generations of aircraft engines, as well as develop technologies that reach far into the coming decades. This enables us to safeguard MTU’s long-term viability,” added Winkler.

MTU had 10,500 employees on its payroll at September 30, 2019, an increase of 8 % over the end of 2018 (December 31, 2018: 9,731 employees). “Expansion of our worldwide capacities entails increasing staffing levels at all company locations. New hires were taken on above all in Munich, Hannover and Poland,” Winkler said.

MTU confirmed its positive forecast for the financial year 2019, which it raised at half-year, with group revenues expected to reach around € 4.7 billion (2018: € 4.6 billion). This is based on the expectation that revenue in the commercial series production business will grow organically by a percentage in the low teens, and that spare parts sales will increase by a percentage in the mid-to-high single digits. In the military engine business, an increase in revenues of around 10 % is anticipated, and the company expects its commercial maintenance segment to see an organic growth rate in the high single-digit percentage range. MTU forecasts an adjusted EBIT margin for 2019 of around 16 % (2018: 14.7 %). Net income is expected to increase in line with operating profit (EBIT adjusted, 2018: € 671.4 million, net income adjusted, 2018: € 479.1 million). The cash conversion rate – that is, the ratio of free cash flow to net income adjusted – is expected to lie between 65 and 70 % in 2019 (2018: 42 %). 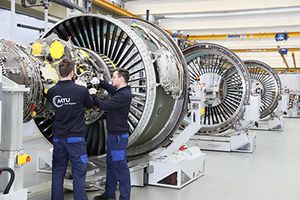 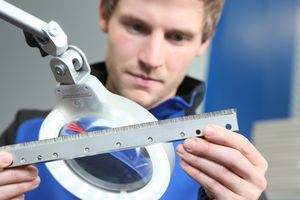 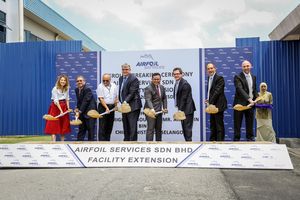 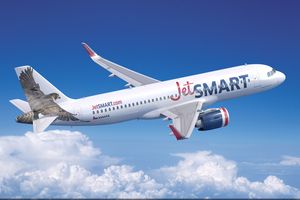